“Rising from the depths of the Earth, The Dragon of Calais appeared in the city and decided to stay. It has since lived on the beach and evolves on the recently renovated seafront, facing the ballet of ferries. The blood that flows through its veins is marked with the DNA of the animals of its family. Among them are iguanas and lizards. The Dragon has a force, it emits a daily magnetic signal, a wave so powerful, that it radiates beyond the seas. It is a call to his family. The first to hear it is an iguana. It is on its way to join the dragon in late summer. This is the Observing Iguana of Fort Risban. He will soon be followed by other saurians.”

During the summer, our team has captured a strong magnetic signal from the Dragon of Calais. Our initial findings suggest that this is a call to the saurians of his family. An observing Iguana, the first ‘fixed’ comrade, has answered the call and is about to take up residence on the forecourt of the City of the Dragon, a stone’s throw from the seafront.

The first ‘sentinel’ machine will be manipulable from 4th September 2020. It will take pride of place on the forecourt of the Cité du Dragon de Calais in the shape of an iguana perched on its rock. It is 4 meters long and 1.8 meters high. Graceful as a praise of the passing of time, it lays in the sun, scanning the harbor and the sea on the horizon. New member of the family of machines designed for Calais, it can be manipulated to create surprise and interaction using a remote control station. It is very agile, spits water, stands up, moves its head and tail, allowing anyone to become a real machinist and bring the animal to life.

Made from the same DNA as the Dragon, the Iguana is also made from the same skin. Indeed, the species of wood used is a radiata pine previously acetylated (© Accoya) in order to best resist sea spray. Three cubic meters of wood were needed to make the 78 pieces that make up the Iguana. 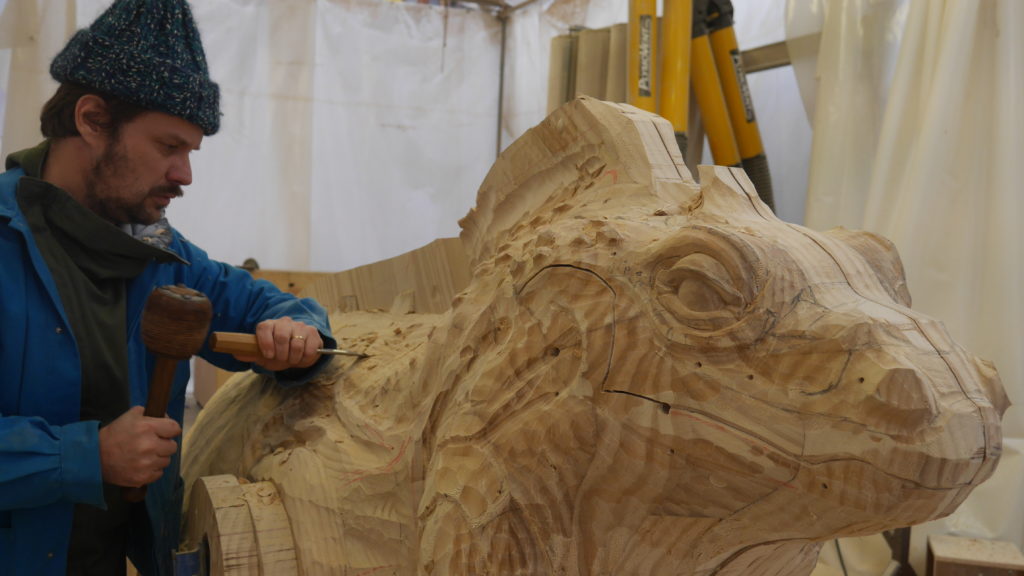 For each machine imagined by François Delaroziere, the company never hide the mechanical cogs but on the contrary want to reveal them. Thus, under the wooden hulls, the viewer can guess the skeleton of the animal, the mechanical structure that will set the reptile in motion. If the metal structure of the Iguana was made of stainless steel in order to best withstand climatic conditions and humidity, the rock on which the Iguana is perched is in turn in corten steel, a self-weathered steel which can rust without deteriorating. This steel is similar to that of the containers on which the Iguana will be perched. The material itself being in motion, the rust will skate this rock to become, over time, its final color. This rusty color of the rock contrasts sharply with the green-blue tones of the Iguana’s skin. 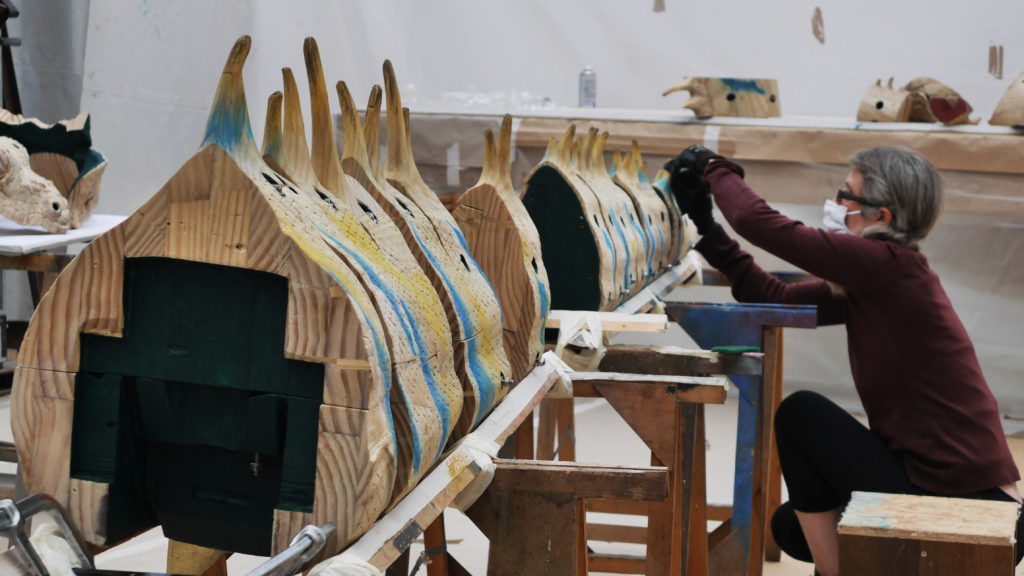 A machine that can be handled by the public

At the heart of the artistic approach of the company La Machine, movement is seen as a language, a source of emotion. If the Iguana does not move in the city, remains  a moving machine, like every creation of the company. Manipulated by the public, it can move its head and tail, stand up or even spit water. To control the animal’s movements, two or three visitors operate six joysticks placed on the control panel.

The arrival of the Iguana in Calais is a key point that heralds the pursuit of the city’s cultural and urban transformation. A new element of an artistic and imaginary universe, the Iguana foreshadows the arrival of new creatures inspired by saurians in various emblematic places of Calais. Each machine will thus be attached to a place that has undergone a transformation: the Calais Dragon on the seafront, the stationary observation machines at Fort Risban, the travel monitors at Dombuker, the iguana family at Fort Nieulay and the Large Iguana in the Saint Pierre district.